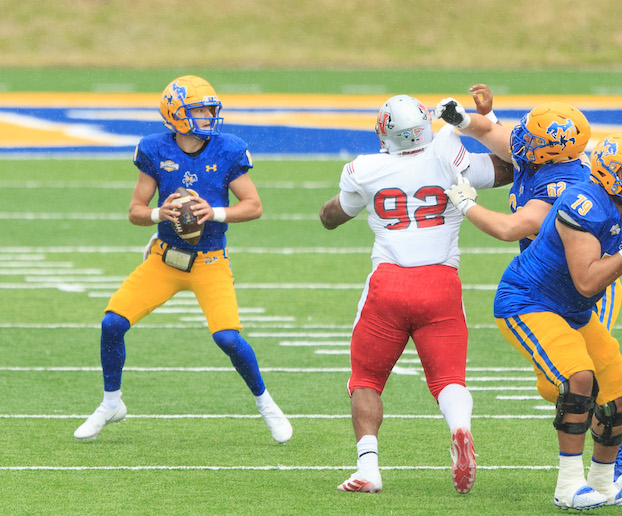 McNeese State’s Cody Orgeron said he wants to be remembered as a good player and a good teammate. (Kirk Meche / Special to the American Press)

When he first rode into town, Cody Orgeron was a little-known quarterback whose twin brother was a highly regarded and sought-after wide receiver.

To some Orgeron was an afterthought, part of a package deal, having played just one year in high school. He was a state champion tennis star who was buried deep on the McNeese State depth chart.

“There were a lot of names on the chart above mine,” said Orgeron. “Everybody wanted my brother and nobody talked to me. I don’t even know if all the coaches knew who I was.”

Orgeron entered McNeese as the sixth-string quarterback. He wasn’t even given a clipboard let alone much of a chance to be a factor in the Cowboys’ future.

He could have gone to LSU, played for his dad — Tigers head coach Ed Orgeron — as a walk-on, but that’s not his style.

“You want to get out there and do it on your own,” said Cody. “That gives you a sense of pride that you earned what you got.”

So he stayed focused, worked hard and became not only a good football player but the leader and face of a program through perhaps its darkest days. He has had three head coaches — was actually talked to first by a fourth — and at least that many offensive coordinators.

He has also had to learn three different offensive systems.

The program has had to deal with academic probation, two major hurricanes, flooding, historic frost, a world wide pandemic and a spring season. Just last spring he had to deal with a career-worst day (71 yards passing) and a career best (344).

Last spring, when he was scuffling there was even whispers that he would be replaced. Never hanging his head, Cody instead went back to work and turned in a stretch of three games that was the best of his career.

He did so under the watchful eye of his father, who was on the sidelines or in the stands for the season. It was a gift for the Orgerons, as his dad usually would only see Cody play during his bye weeks.

At the time Ed said he “was just a proud parent happy to be able to watch.”

On Sept. 11 he’ll get a chance to see Cody play again, this time against his Tigers in Baton Rouge. There will be hugs, but also not one inch given from either.

“We’re going to compete, but we’ll shake hands and hug after the game.”

That’s the way it is in a football family. It’s also why he came back to McNeese.

Through everything the six-year senior stands at the head of a football team that has come through it all and is ready for a breakout season.

Cody Orgeron sits clearly in the saddle for one final ride as a Cowboy with a team, campus, city and area rejuvenated like the program itself.

“My journey, I would not trade it for anything else,” Orgeron said. “I came here with a chip on my shoulder wanting to prove I belong. Nobody thought I was good enough but I worked hard every day.

“It shows where hard work and dedication can take you. It shows others what they can do, as well.”

He has also seen the other side of football. In some ways Orgeron has become the star his brother Parker never got the chance to be.

Parker played for McNeese from 2016-18, making catches and turning in sparkling kick returns while his brother rode the bench. But Parker’s career was cut short by head injuries that led to numerous concussions, so the family made the decision it was time for him to hang it up.

“That was tough,” Cody said. “It was one of the hardest things to go through, to see my twin brother struggle. He put so much into football and to have it cut short wasn’t fair.”

Parker has stayed in the sport, now as an assistant offensive coach at LSU.

His brother’s injuries also went a long way into making Cody what he is today. He saw how quickly the game he had come to love late could be taken away so quickly.

“It put everything into perspective,” Cody said. “He (Parker) tells me all the time how much he would love to have just one more practice. I understand that completely.”

“You can never go back once its over,” said Cody.

And nobody with the Cowboys wants him to go.

“He is our leader,” said receiver Josh Matthews. “Cody gets us going, brings us all together. Not just on the field but all the time. He makes sure everybody is doing good.”

That was especially important during last fall’s hurricanes, when the Cowboys were scattered all over the place. Their quarterback made sure they were all in touch as best they could and that football was being put in the right perspective.

“That’s when he really showed his leadership,” head coach Frank Wilson said of his QB. “He is our guy no matter what the situation. Nobody has worked as hard and when your quarterback does that, everybody notices.”

Not that it matters to him, but Cody has moved up in the record books at McNeese. His 36 touchdown passes is tied for sixth most in Cowboy history and his 4,336 yards is good for night place.

All he cares about is winning.

When asked what he wants his legacy to be at McNeese, Cody kept it simple.

“I want to be remembered as a good player and a good teammate,” he said. “As far as my legacy, I want to go down as the quarterback that led McNeese back to a conference championship and back to the playoffs. That’s all that matters.”

You get the feeling if he does that, Cody can ride off into the sunset one happy Cowboy.

$111 million set aside for Fort Polk in advancing…