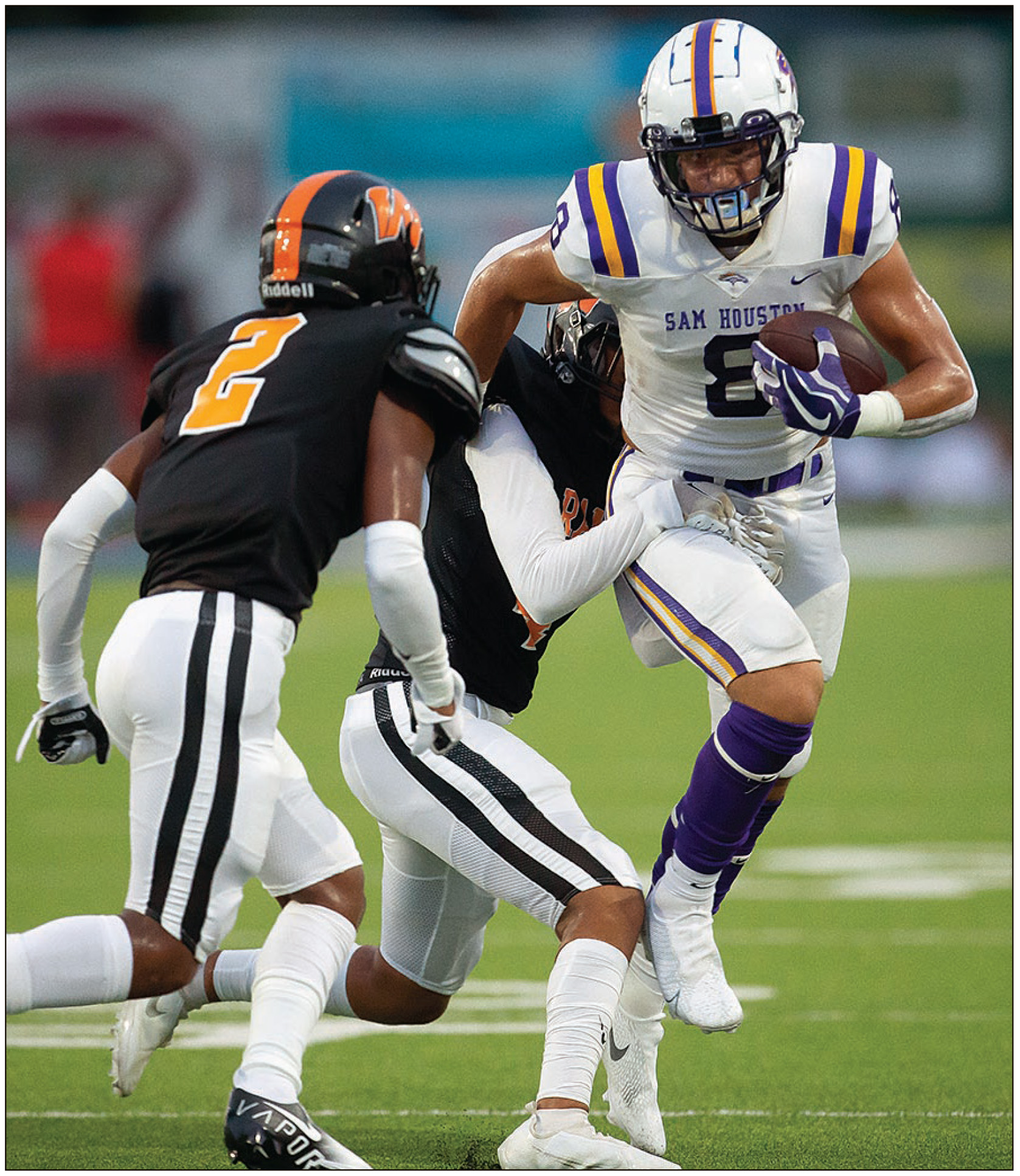 The Broncos will host Class 5A power West Monroe, while Jennings will host Leesville, without having scouted the Wampus Cats who did not play a scrimmage or jamboree due to COVID-19 protocols.

For Sam Houston, the result of the jamboree, a 21-21 tie with Westlake, was not the problem. Head coach Chad Davis said he’s more concerned about how the Broncos prepared for it in the week before.

“We didn’t have a good week of practice,” Davis conceded. “We kind of assumed we could just show up and turn the light switch on. That’s not how it works. That’s not to take anything away from Westlake, who played a good game.”

Davis said the Broncos have been better in practice this week.

“Practice has been good, and in the jamboree we had some big plays offensively,” he said. “We had some mistakes here and there, all of them correctable.”

“They are a big, physical, well-coached team,” Davis said of the Rebels. “We are ready to go to battle. Offensively, our timing is getting better, the quarterback is doing better with his reads and the offensive line is getting more comfortable playing together.

“Their offense is big up front and their running back Rayshawn Pleasant is a pretty good player. If we get our reads, do our jobs and keep Pleasant contained, we’ll have a shot. The team’s attitude is up; they know what is at stake this week.”

Jennings lost 39-6 to John Curtis Christian in its jamboree, playing without a pair of linemen on each side of the ball.

“It was tough sledding,” said Bulldogs head coach Rusty Phelps. “We would get a first down but then get behind on down and distance. It was hard to sustain offensively. I really like the way our special teams played. Defensively, we got a couple of stops. It was a good learning experience for us. I was proud of the way the kids played.”

Phelps said not having film on Leesville makes preparing for the game a challenge.

“We are just going off what we did last year and in the past against them,” Phelps said. “We don’t know what they have. We have to hope they line up the way they have in the past or else we’re in trouble.”

Phelps said he knows the Cats will feature running back Calab Gallashaw, who has scored 40 touchdowns over the past two seasons.

“He’s a good player,” Phelps said. “He did a lot of damage running and catching the ball out of the backfield against us last year. We will have to know where he is at all times.”

Phelps said there were good things to take away from the jamboree loss.

“We had a couple of nice runs here and there,” he said. “Our defensive line held up well. You have to look at the individual points, how each kid played. If anything, we had an opportunity to build some depth, let some kids play. There are lots of things we can build off of.”