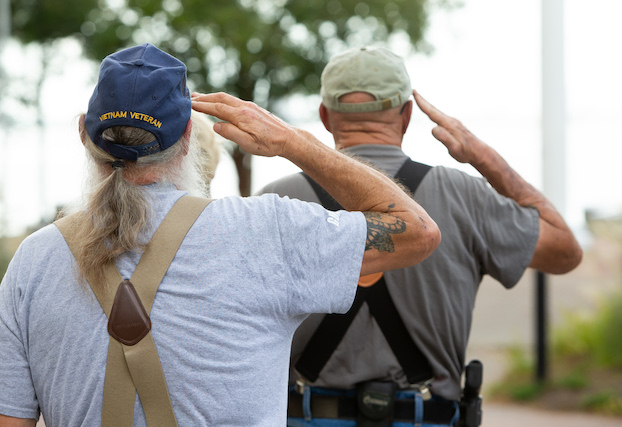 The Southwest Louisiana Veterans Association and community members gathered at Lake Charles’ Veteran’s Memorial Park on Tuesday to commemorate the withdrawal of U.S. troops from Afghanistan. The occasion was opened with a moment of silence at 3:29 p.m. signifying the time of withdrawal and prayer.
Bubba Viator, association president and veteran, said the event was important to veterans so they could express their “feelings about the manner of withdrawal” from Afghanistan.

“We’re here to give our local veterans a voice,” he said.
Viator expressed frustration at the amount of equipment left behind and the federal government’s inability to get everyone out of the region in time. Private citizens have been able to charter planes and get as many 8,500 people out of the region, he said, so it is shameful the government could not follow suit.
“At least they could aid those guys,” he added.
While what’s done is done, Viator said veterans and civilians alike must hold elected officials accountable for events such as these.

“Put pressure on them to make a change. If we don’t do it, nobody will. We’ve got to come together as a community.”
Lee Perkins, a retired marine captain, likened this withdrawal to the U.S. troops leaving Vietnam in 1973.

“Did we like pulling out? No. When we left we were winning the war, but they made a decision, and it was more organized than this mess that was going on this last month,” he said.
David Soileau, a veteran, expressed deep sadness at the withdrawal because of his firsthand encounters with the Afghani people.

“Actually, they were uplifting at first, But they also shed light on the fact that when we leave, they’re all pretty much dead,” he said. “Seeing how it was carried out here recently is saddening and alarming that we would just do that to people that helped us, and we said we were there to help.”

Demetrius Lazare, a veteran, reminded listeners of the tremendous sacrifice every service member makes for the country.

“They risk their lives to help people who couldn’t help themselves. We must never forget that they are heroes.”
Service members are not to blame for the current challenges, he added.

“It’s the Commander in Chief down to senior leadership that has to make decisions and find a way to get our American people back home,” he said.
Tim Robles, a veteran, echoed such sentiments lifting high the honor of the armed forces.

“Nothing was done in vain,” he said.  “One thing I’m very proud of is a generation of young women and children got to go to school, read, have jobs. We opened up for a whole new generation the idea of what the world really has in store for them.”