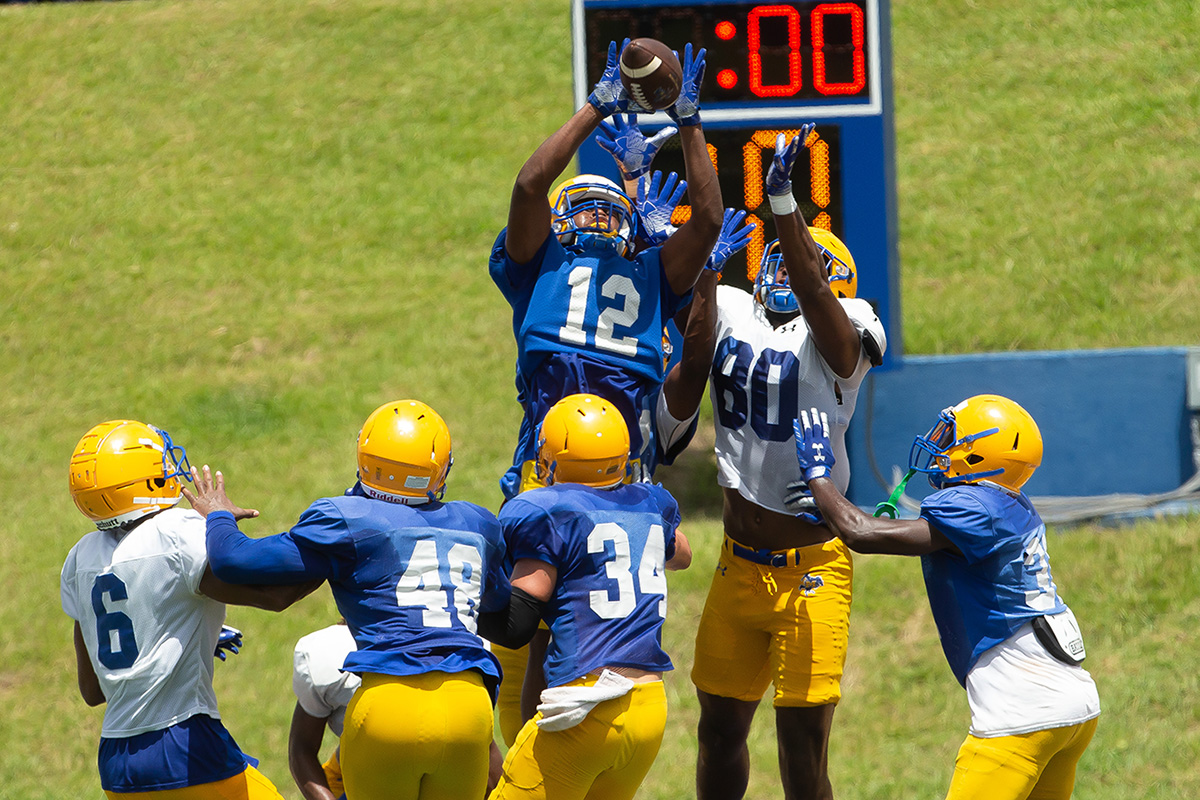 Edwards Gilds III makes an interception on a pass attempt during McNeese’s scrimmage on Aug . 21 . The Cowboys will open the season at home Sept . 4 against West Florida. (Rick Hickman / American Press)

Fall camp, which actually takes place in summer, came to an official close for McNeese State Saturday with little fan fare and eyes on the weather.

When you consider everything this program has been through over the last year, that seems about right.

Playing a mock game against themselves in preparation for the season opener with West Florida this coming Saturday, the Cowboys have now officially ended the preseason portion of their work.

This week is game time. Of course, Mother Nature got one more shot in on the Cowboys, as hurricane Ida forced the cancellation of Sunday’s planned Media Day at McNeese. While the direct hit was to the east of Lake Charles, the event was called as a precaution.

As for the mock game, head coach Frank Wilson was pleased the Cowboys got it in.

“I thought (it) went well,” said Wilson. “It entailed the opportunity for us to be able to see some glimpses of our upcoming opponent to divide our team up, not necessarily to go against one another but to go against those things that we expect based on film study from West Florida.”

As for camp, Wilson was happy with what was gained and ready for what is ahead.

“It was a good camp,” he said. “We got to look at a lot of players and we are excited about the start of the season.”

Here are five things we have learned about the Cowboys during this camp.

In the spring McNeese got by with just enough players staying healthy to field a team at times. Now the Cowboys have not only depth but quality depth, especially on the lines. That is the biggest takeaway, as the club gets ready for a regular 11-game schedule.

It is likely the quality depth that has the McNeese coaching staff most excited, since they can now run actually practices and not worry about having enough healthy bodies to actually get in good workouts.

And depth makes for competition, which usually leads to better players working harder to get on the field.

2 — Chemistry is much better.

This appears to be a team that enjoys being around each other and has fun at practice. There is music, laughter but also a lot of work which was done during the camp. This is new to McNeese of late, as everybody seems to have bought into the idea that they are in this together.

No matter how things turn out, that is a big step in a new direction for a program.

With the addition of Stephon Huderson at running back and Cee Jay Powell at receiver, the Cowboy offense has gotten much more dynamic. With Josh Matthews and Mason Pierce, McNeese has several players now that can turn at 10-yard pass into a touchdown from anywhere on the field.

That should open up the playbook at give the Cowboys a chance to score with the best of the teams on their schedule. It is a huge upgrade from where this team was in the spring. In a league that scores points in bunches this is a big deal.

If there is one group which stands out above all others it is the front line on defense.

Defensive ends Isaiah Chambers and Mason Kinsey showed they haven’t slowed down one big since dominating in the spring. C.J. Semien has also had a solid camp on the outside, and some new additions on the inside should help slow up the opponents’ run games.

This is a group that has the potential to be special. Wilson said he thinks it might be the best in the country. It is clearly the best on paper in the Southland Conference.

There are a lot of moving and changing parts with this Cowboy team. The same can be said for the rest of college football really, thanks to COVID unknowns and the transfer portal.

McNeese has 40 new faces floating around, some of whom were on campus in the spring and others who were not. How they mesh and sort out playing time will go a long way in knowing how this team will play.

While there is a lot of hope there are also questions that won’t start to be answered until the season begins at noon on Sept. 4 inside Cowboy Stadium.