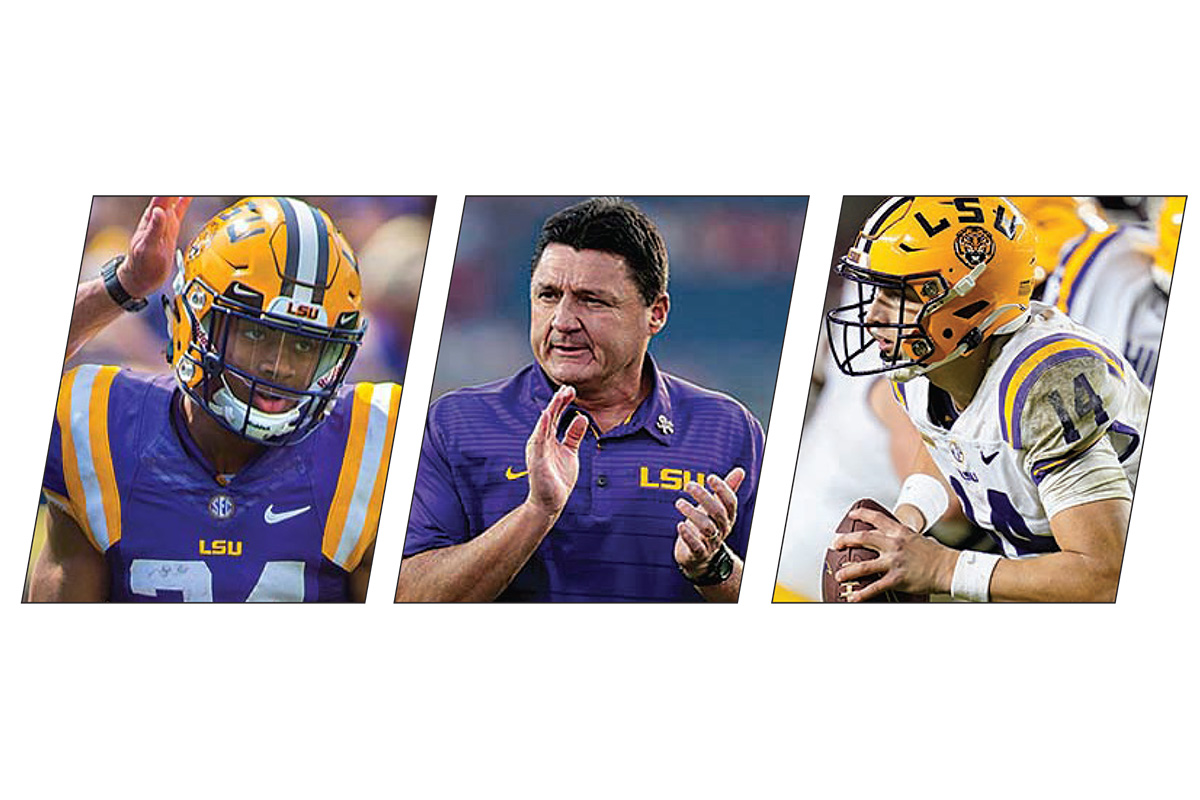 It’s not as easy as clicking your cleats and making it 2019 again. But that’s kind of the idea for LSU coach Ed Orgeron heading into the 2021 season.

Never one to stand pat, Orgeron brought on six new assistant coaches after the Tigers followed up the 2019 national championship with an embarrassing belly flop of a title defense with a 5-5 season.

Joe “Heisman” Burrow is not walking through that door any time soon.

Those were put in after Orgeron hired young Joe Brady away from the Saints as passing game coordinator.

Brady is now offensive coordinator of the NFL’s Carolina Panthers, but Orgeron lured away one of his disciples, Jake Peetz, to play the Brady role for the attempted reboot.

Here’s a quick look at the overall prospects:

The August quarterback duel never happened as Myles Brennan broke his non-throwing arm days before practice began. That gave the job to Max Johnson, who probably would have won it anyway, if for no other reason than he’s the more mobile of the two and fits what Orgeron wants to do in recapturing the read-pass option offensive magic of 2019.

Best case: Johnson picks up right where he left off in winning the final two games of last season when he out-dueled two of the Southeastern Conference’s top quarterbacks in Florida’s Kyle Trask and Ole Miss’ Matt Corral. By the time Brennan returns at midseason, there’s no reason to try a second quarterback.

Worst case: It turns out those final two games were too small of a sample size to judge. And opponents are better prepared to plan against Johnson.

If there’s one area Orgeron seems frustrated with, it’s his running backs. He’s been begging for veteran juniors John Emery and Tyrion Davis-Price to step forward while taking longer and longer looks at promising freshmen.

“We need these guys to come out and perform …” Orgeron said after last week’s final scrimmage. “I believe in them. They’re great backs. But we need some consistency out of both of them. We haven’t gotten it, really, in camp.”

Look for freshmen Corey Kiner and Armoni Goodwin along with sophomore Josh Williams to get their chances.

“If (Emery and Davis-Price) don’t play well, we’re going to have to find out who our best running back is,” Orgeron said.

Best case: The light bulb comes on with at least one of them and there’s a breakout season like Clyde Edwards-Helaire’s in 2019.

Worst case: LSU labors to get 100 yards per game on the ground as it did last year — the Tigers were 5-0 when they rushed for more than 100, 0-5 when rushing for less.

Opt-outs last season allowed freshman all-American Kayshon Boutte to emerge late in the season as one of the SEC’s rising stars — including an SEC-record 308 yards receiving in the finale against Ole Miss.

He’s the lone proven commodity, but there’s boatloads of highly touted young talent who should give the Tigers plenty of options.

“I can’t wait to see those guys play,” Orgeron said.

Best case: Talent takes over and some freshmen step up.

Worst case: Nobody other Boutte scares opposing defenses and they’re able to gang up on him.

Nothing flashy here after losing Arik Gilbert to the NCAA transfer portal. But Kole Taylor was solid last season and incoming freshman Jack Bech — a high school wide receiver — could give LSU the pass catching option from the spot.

Best case: The duo works out well enough to keep the position a factor in the offense as Orgeron wants everybody involved.

Worst case: The position goes back to using a small offensive lineman.

Some funny math here, but LSU had all five starters returning up front, then lost the most talented one to the transfer portal, and ended up with five returning starters.

But Cam Wire started as many games at left tackle as the now-departed (and oft-suspended) Dare Rosenthal did last season, so the unit is technically intact.

It’s a veteran group, but one that had problems most of last season, particularly in the running game.

Reports from August work had the line struggling to protect in both major scrimmages, although Orgeron saw improvement the second time around.

Best case: LSU’s defensive line will give a lot of offensive lines fits, and the Tigers’ veteran version will welcome the step down in competition once they quit beating heads with teammates.

If there’s anywhere in the lineup you want continuity and experience, it’s the O-line and the familiar group takes the step up. Orgeron is high on some freshmen.

Or maybe just leaning heavily on the RPO offense of 2019 puts far less pressure on the line as it did during the national championship.

Worst case: The same faces mean the same results as a year ago.

Probably the Tigers’ strongest and deepest area — even with the long-term loss of tackle Glen Logan. Ali Gaye, Andre Anthony and B.J. Ojulari are elite pass rushers from the edge. They’ll miss Logan but there’s plenty of depth with the likes of Neil Farrell, Joseph Evans and Jaquelin Roy, while incoming freshman Maason Smith was one of the stars of the recruiting class and has been impressive in camp.

Best case: LSU is able to run multiple bodies in and out, staying fresh and active against today’s high-powered offenses.

Worst case: It would take a biblical rash of injuries to put a dent in this defensive wall.

Somewhat of a question mark and maybe one of the reasons LSU will often as not deploy the 4-2-5 alignment. Damone Clark is the leading returner tackler, although he often got lost in last year’s defensive confusion. Micah Baskerville on the outside was probably the most active. LSU is looking for big things from Clemson transfer Mike Jones and junior college newcomer Navonteque Strong.

Best case: Clark, who doesn’t lack for talent, is more consistent in the middle and the transfers add something to the mix.

Worst case: Never a good idea to depend on transfers.

It was never a question of talent with last year’s Lost in Space back end of the defense, which gave up 323 air yards a game. Many consider freshman all-American Eli Ricks and two-time all-American Derek Stingley the best pair of cornerbacks in the country. Orgeron is excited about Jay Ward and Todd Harris at the safeties, and there are plenty of options for the nickel back

Best case: Communication returns to the secondary and lets the talent shine.

Cade York is probably the best kicker in LSU history and a preseason first-team all-American. He provided the season’s highlight with a school-record 57-yard field goal through a thick fog to upset Florida, one of a school-record six 50-yarders last year. True freshman Peyton Todd will try not to mess up the punting game.

Best case: Just leave York alone and let him do his thing.

Old, new, borrowed And Blue: Cowboys say they have…