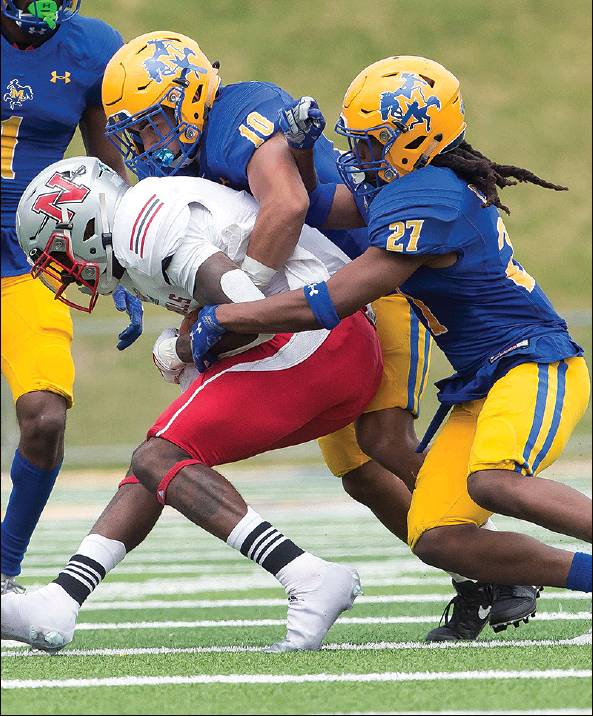 Two games into the spring season the McNeese State secondary was a mess.

Missed tackles and blown assignments made for big plays being given up.

Some figured the Cowboys were lacking talent, but head coach Frank Wilson blamed a lot of of the troubles on other issues.

“We didn’t have people in the right positions, the right places,” Wilson said. “We had to move them around, make sure we put them in a position to make plays.

“They also lost their defensive coordinator just before the season started so we were scrambling a bit at the beginning.”

The moves paid off and the secondary started to make plays. By the end of the seven-game season that group was one of the better ones on the team.

“I like how they worked through the problems and how they are looking now,” Wilson said. “I think our secondary can be a real strength of this team.”

In a league filled with big plays from throwing quarterbacks, a secondary that can hold its own is important.

“You don’t want to give up big plays, easy scores,” Wilson said. “You want to make them work for their yards.”

You also want turnovers. Andre Sam provided that spark. The redshirt junior from Iowa High had three interceptions in the spring and forced a fumble.

He also led the team in tackles with 52 and had a sack. His work earned him a first-team all-Southland Conference honor and a spot on the preseason all-SLC club.

Sam has become a leader in the secondary along with redshirt senior Colby Richardson. The three-time letterman who had an interception in the spring says this is a much better group now.

“We have a lot of guys who can make plays,” Richardson said. “And we have a bunch of guys who want to be the ones making the plays. We want the challenge and want the ball thrown our way.”

Senior transfer Corione Harris from Kansas will get his shot after spending the spring practicing with the Cowboys.

Chris Joyce joined the Cowboys from Tulane in the spring and was named to the second-team all-conference squad. He led the league with 15 passes defended and had 27 tackles. Enos Lewis was third in the spring in tackles with 39, playing in all seven games, giving the Cowboys another experienced player working downfield.

“This is the best group we have had,” Sam said. “Chris Joyce and Corione Harris are really good. They can make plays against anyone. We have a lot of confidence.”

That is a long way from where this group started and is a big reason why the Cowboys say they have high hopes.

No vaccine, no game for you: LSU outlines Tiger…