The Trailblazers held DeRidder to 53 yards in a 20-0 shutout. The Dragons averaged just 2.65 yards a play.

LCCP linebacker Kendrick Pete recovered a fumble with 4:34 left in the first half and returned it 35 yards for a 13-0 lead.

LCCP had one offensive possession in the first half, but it was more than enough. The eight-play, 53-yard drive ended with a 5-yard scoring run by Devonte Guidroz.

LSU commit Trevonte Citizen didn’t touch the ball until the second half, but he quickly made his mark. On his second touch, he sprinted up the sideline for 52 yards and a 20-0 lead with 10:32 left in the game. Citizen led the Trailblazers with 61 yards on two carries. Guidroz finished with 25 yards on four carries, and Jarell Joseph added 21 yards on four carries.

The jamboree will conclude today with three games starting at 5 p.m. with a matchup between LaGrange and DeQuincy. Sulphur and Washington-Marion will face off at 6:30 p.m., while Barbe and St. Louis Catholic will close out the jamboree with an 8 p.m. start. 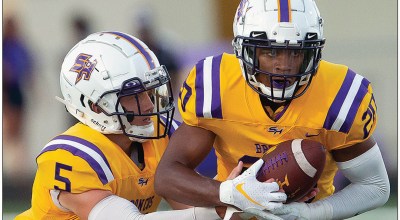