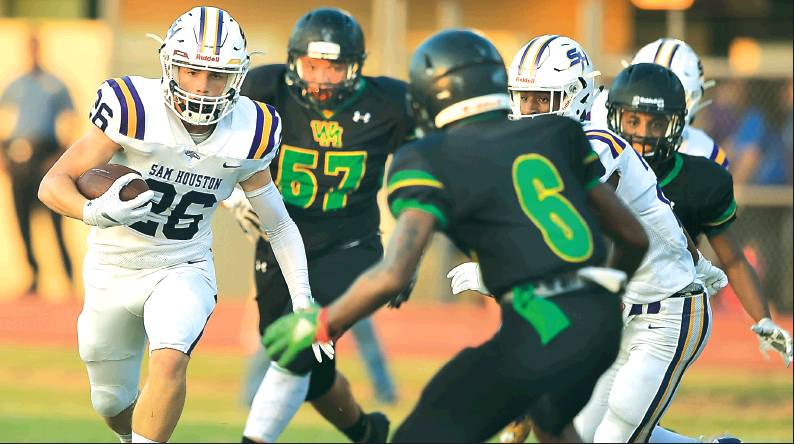 It is not a rebuild, just a reboot.

Sam Houston will restart its varsity program this season after a one-year hiatus.

Lack of experience will be the issue early in the season, so first-year head coach Chad Davis has upped the intensity in practice to get his team ready.

“We have set the tone in practice on how everything is going to go,” Davis said. “I don’t think Friday night is going to be a shocker to them.

“These kids have worked very hard all summer, and the practices have been very up-tempo and physical. We are going to have to grow a little bit early, but I think we are in a good spot right now. These kids are all itching, ready to play, and ready to compete on Friday nights. We played a little JV season last year, which was nice. We got to compete a little bit, but that is not Friday night football. They are ready to play together again, play in our stadium and have a season.”

The Broncos will get a huge early test when they host Class 5A powerhouse West Monroe on Sept. 3.

“We are preaching championship mentality around here,” Davis said. “If we are going to get to that level, we have to play that caliber of team.

“The kids are not backing down whatsoever. The kids are ready. They don’t care who is coming or where we are going. They are just ready to compete.”

Sam Houston has an all-new starting lineup except for three seniors who started in 2019 in wide receiver Luke Yuhasz, offensive lineman Colby Bertrand (6-1, 250 pounds) and Dylan Abshire, who converted from running back to receiver.

“Those guys have the experience,” Davis said. “They have played Friday nights and have been successful.

“Those guys have really owned the leadership role for us. All these kids are following in their footsteps. When they are working and being leaders, everyone is following.”

Yuhasz, who played for Division III Notre Dame last season, caught 57 passes for 980 yards and 21 touchdowns in 2019, while Abshire had 773 total receiving and rushing yards with five touchdowns.

Junior Dennis Gardere will take over at tailback while Ashton Fuselier and Quinton Simon are part of the receiver corps.

“(Gardere) is a big, physical kid with a lot of expectations for him,” Davis said. “He is another guy that has no varsity experience. We have to see how he matures, and, hopefully, he matures quickly.”

Senior Andrew Glass, who helped lead the Broncos’ baseball team to the Class 5A semifinals in May along with Fuselier a will start at quarterback.

“He played quarterback for us last year in our JV season, so he got a little bit of a taste of what we do and how it operates,” Davis said. “He has really taken off with it.

“He is always watching film and asking questions. He is a senior that has a lot of potential, and he is putting in the work.”

Davis feels the driving force of the Broncos 3-4 defense, which has a new defensive coordinator in Chad Coltharp, will be linemen OJ Patterson, Josh Lemonier and Draven Duncan and junior linebacker Jamorion Jackson (6-3, 200).

“He (Jackson) is the motor of that whole unit between him and the three defensive line guys,” Davis said. “We moved him over to the other side for depth.

“He is starting at linebacker and doing some really good things over there. He is 6-3, 200 pounds, and flies around. He is a very physical, big kid. We have an older defensive line again. They are showing really good signs of being competitive. They are very physical. It is exciting to see.”

Davis plans for the defense to quickly get the ball back to the Broncos’ offense.

“The biggest thing for us defensively is not giving up the big plays,” Davis said. “We have to keep everything in front of us, get turnovers, play physical football and get the ball back in the offense’s hands. That is their job.”

Barbe: Bucs ‘fired up’ to be able to play