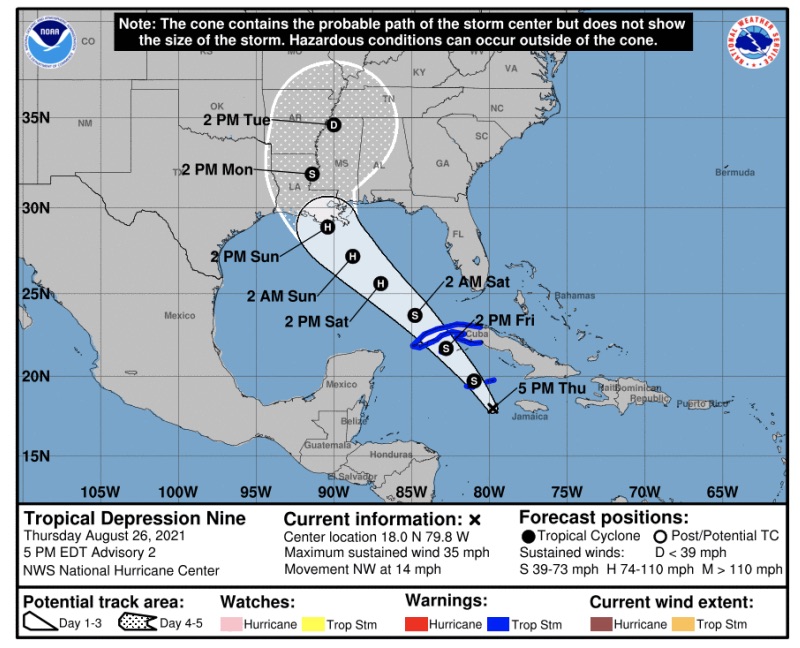 Tropical storm-force winds of 40 miles per hour were found by hurricane hunters with Ida’s track expected to intensify into a major hurricane before making landfall along the Louisiana coastline this weekend.

While the storm has shifted slightly to the east from its early projections “all of Louisiana remains in that cone of uncertainty,” Donald Jones, National Weather Service meteorologist, said Thursday. “It does not mean anybody is out of the woods in Louisiana, though it is a little bit better news for Southeast Texas.”

The storm is expected to make landfall Sunday night or early Monday morning with wind speeds of greater than 110 miles per hour. Forecast confidence has increased with a landfall expected “somewhere around Terrebonne Parish.”

Jones said the forecast track is probably going to bounce back and forth over the next two days before charting its designated course, but if it continues as it is, it will be “bad news for greater New Orleans as well as the Northshore of Lake Pontchartrain.”

Ida is currently in the southern Gulf of Mexico moving at a northwest track of 14 miles per hour. As it moves, “conditions are expected to be nearly ideal for significant intensification if not rapid intensification,” Jones said, as sea temperatures are warmer than usual and there is virtually no wind shear in the Gulf.

“Ida is going to cause life-threatening flash flooding, storm surge and a wind threat wherever it winds up making landfall,” he said.

Tropical storm force winds are expected to arrive in Southeast Louisiana by 8 a.m. on Sunday, mid-morning in South Central Louisiana and to the I-10 corridor by midday. Sunday evening will be the latest individuals needing to evacuate can safely do so, he said.

Widespread showers and thunderstorms are expected to move through the region over the next two days. Though these systems are unrelated to Ida, “they are going to play a role in the fact that they’re going to saturate the grounds, making the flash flood risk much higher.”

Once Ida makes landfall, the storm is expected to move out of the region relatively quickly but that is “not to say it won’t produce a whole lot of rainfall,” Jones said.

One year later: Region nowhere close to being fully…