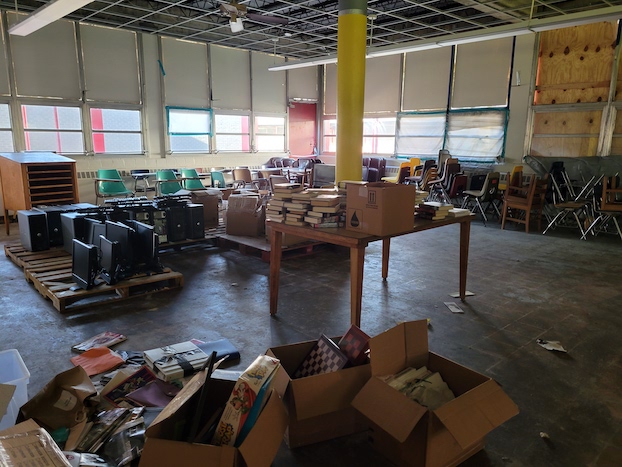 When DeQuincy High School students returned for the new school year, everything was neat and clean, but no work was going on to repair hurricane damages from last year. The library is in disarray. Administration and counselors are working out of what were the choir and band rooms. The stairs in the main building, to eight classrooms, are blocked off. The gymnasium, which includes two gyms, offices and storage, will be demolished in November.

Construction bids were accepted on Aug. 10, according to Holly Holland, public information officer for the Calcasieu Parish School Board. The construction contract consists of restorative construction for DeQuincy High, Middle, Primary and Elementary Schools and replacement of the maintenance building.

“FEMA procedures are very stringent,” she said, “and we must follow every requirement to be reimbursed. We submitted our first documentation to FEMA in May and have not received any of those funds.”

Karl Bruchhaus, CPSB school superintendent, met earlier this year with U.S. Sen. Bill Cassidy, R-Louisiana, to request assistance in moving along reimbursements, even partial reimbursements, saying that buildings that had been remediated but not repaired now have additional damage. He has also made regular calls to FEMA in an attempt to expedite the progress.

CRCS is the engineering and architectural firm assessing damages, needs and completing FEMA paperwork for schools and several municipalities. According to a report they submitted to the school board, the timeline tackling the repairs began September 2020 and the CRCS teams began their work November 2020.

Work began in March 2021 with roof repairs at the high school and middle school.

Smith said the original contract for the campus — overall — was canceled because the price of materials rose so much the bid had to be resubmitted.

“Prioritization is based on the architect’s workload,” Holland said. “Some schools have not been bid out yet, so DeQuincy High School is well ahead of them in the repair process.”

Replacing the gym is still in the design phase and won’t be bid until later this year. One project management firm, one architectural firm and three general contractors have been assigned to DeQuincy High School so far.  The CRCS report indicates temporary modular buildings will be delivered soon as part of the upcoming gym replacement project.

According to information from CRCS, the overall cost of damage at DeQuincy High School is $5,995,862.

“With the help of our project management company, repairs, while slow, are happening. They will continue to happen until our campuses are restored,” Holland said.