From deep routes to quick slants, Orgeron has his pick 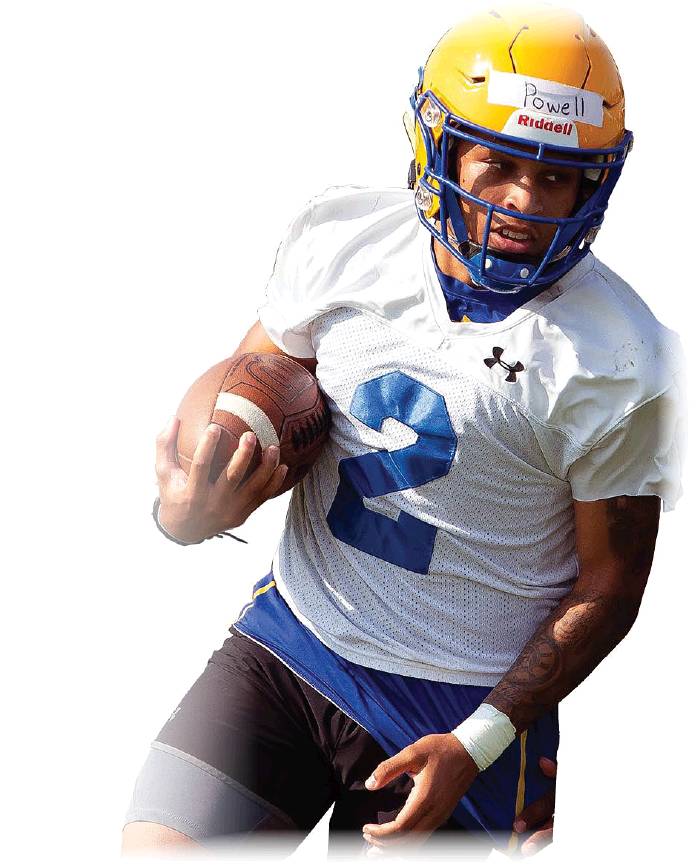 Rick Hickman / American Press Former Louisiana Tech receiver CeeJay Powell relies on speed to offset his lack of height. Powell is one of a handful of new targets for sixth-year quarterback Cody Orgeron.

The college football season was barely an hour old when, though his face mask and mouth piece, one could see Cody Orgeron smiling.

Moments before he completed a short pass over the middle to Stephon Huderson circling out of the backfield. With a burst through the middle of the defense Huderson flashed the kind of speed that makes linebackers miss tackles and defensive coordinators lose sleep.

Two plays before, Orgeron dropped back into the pocket and fired the ball about 55 yards downfield to a streaking CeeJay Powell, who had used his speed to get behind the secondary.

There were a lot of those sights during practice that first day, as McNeese State began camp with high hopes and solid expectations. None bigger than those of Orgeron, who in his sixth year with the program has more weapons than ever before surrounding him.

“I’ve got Lamborghinis, Ferraris, Porches,” Orgeron beamed. “These guys are exciting. They have speed, hands. This is going to be fun.

“And these running backs, they turn short gains into big gains.”

Powell and Huderson are newcomers to the team. Powell was here in the spring after transferring from Louisiana Tech but wasn’t eligible to play after taking part in the 2020 fall campaign.

Huderson is a transfer from Tulane, coming to Mc

He adds to a core of backs who were slowed last spring by injuries.

“The hard part was not being able to play in the spring,” Powell said. “You want to help the team but you just can’t. It’s hard to wait.”

Some of the waiting ended last Saturday when Powell showed his skills with a pair of touchdown catches during the first scrimmage. He is also quick to admit he missed an easy catch earlier.

“That really upset me,” he said. “I will always get open. I have to use my speed because I’m vertically challenged. But I have to make those catches so the quarterback will trust me.”

The 5-foot-7 Powell had his quarterback’s trust last spring during workouts.

“CeeJay is just a guy who makes plays,” Orgeron said. “He runs all the routes, can make all the catches and his speed opens everything up for the rest.”

Powell is joined at receiver by Josh Matthews, a preseason all-Southland Conference selection. Matthews had 32 receptions for 458 yards to lead the Cowboys over the seven-game spring campaign. Also a transfer from Louisiana Tech, Matthews had four touchdown catches in the spring as well. He loves having his buddy from Ruston joining him.

“We are going to have a lot of weapons now,” Matthews said. “We are really going to be able to spice things up. You won’t be able to stop all of us.”

Toss in LSU transfer tight end Jamal Pettigrew and speedy Mason Pierce and the receiving group is strong. And with four catches for 65 yards in the scrimmage, backup quarterback Walker Wood might be a huge surprise.

“He’s our secret weapon,” Orgeron said of his stand-in.

Huderson may be the most important weapon. A late edition to the roster, Huderson is a graduate transfer who played four seasons at Tulane, gaining 1,375 yards and averaging 5.3 a carry. He was at his best in 2020.

Last fall he earned second-team all-conference honors in the American Athletic. He finished with 773 yards and four touchdowns, averaging 6.0 a carry.

Huderson had three 100-yard plus games. He has appeared in 44 games over the last four seasons and should be a big part in the McNeese offense. He joins a backfield that has experience both on the field and at the Football Bowl Subdivision level.

“I decided to come here because of the talent on this offense,” Huderson said. “We have a lot of guys who can make big plays.”

A healthy running game, something missing from the spring on a consistent basis, is the best friend to Orgeron.

“I just have to sit back there and watch these guys work,” Orgeron said. “The less I have to do the better.”

Fact is, Orgeron will have to make the tough decision to ensure everybody on offense gets fed.

“We are going to maximize all our weapons,” said head coach Frank Wilson. “We will use every bullet we have.”

That makes for a happy Orgeron who only has to find the right target on each play and pull the trigger.

Just the thought of that leaves him smiling even more.

Neese in the summer.