Cool under fire: Cowboys acclimate to playing at noon 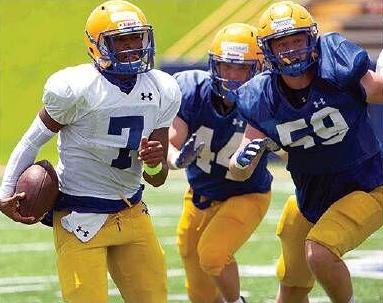 Freshman Dillon Simon eludes a pair of defenders as he carries the ball on a quarterback keeper. Simon, who played at Lake Charles College Prep, led the Cowboys in rushing yards with 56 during their first scrimmage Saturday at Cowboy Stadium. He added 67 yards passing. (Rick Hickman / American Press)

At McNeese State, Friday Night Lights has been replaced by Saturday afternoon sunshine.

Yesterday the Cowboys got their first taste of the new fall game time and the reaction was unanimous: It’s hot.

Under a scorching sun and with temperatures reaching 92 degrees, the Cowboys played the first of two scrimmages at exactly the same time they will kick off all home games.
Last year’s two hurricanes have forced noon starts, something the players are getting ready for.

“My cleats felt like they were melting,” said redshirt sophomore defensive tackle Joey McNeely. “I am glad we got to work out at this time. We are going to have to get used to it.”

As expected, it was mixed results for the Cowboys. At times the new-look offense dominated but the defense stepped up to make plays, particularly in the second half.

“We played decent but we need more energy,” said Mc-Neely, a Kinder High product. “We played better after getting settled.”

All-American end Isaiah Chambers led the defense with three sacks. But when the group wasn’t getting to the quarterback the offense was productive. That included a 99-yard touchdown drive.

“When you can score on a 99-yard drive, that is really something,” said quarterback Cody Orgeron. “We have a lot of guys who can make plays out there.”

Orgeron called the offensive difference between now and the spring, “night and day.”

He finished the scrimmage 12 of 15 for 136 yards and three touchdowns. After 62 plays the offense rolled up 461 yards and five touchdowns.

“I thought both sides of the ball had their moments,” Orgeron said. “We both made plays.”

Orgeron threw two touchdown passes to Louisiana Tech graduate transfer CeeJay Powell. The first was a 15-yarder that capped the 99-yard drive. The other was a 20-yard slant.

“CeeJay is a difference-maker,” said wide receiver Josh Matthews. “He can open up things underneath and burn people.”

Powell finished with three catches for 45 yards. Matthews had four for 56. Backup quarterback Walker Wood, who Orgeron called, “our secret weapon,” led the Cowboys with four catches for 65 yards.

“He is very versatile,” head coach Frank Wilson said of Walker, who last year filled in at running back and has also played some in the secondary this camp.

“We may work him him at quarterback some,” Wilson said with a wink.

Quarterbacks Dillon Simon and Devon Tott, both true freshmen, had their moments. Simon, a Lake Charles Prep product, ran for 56 yards on seven carries to lead McNeese. Tott had nine rushes for 51 yards, including a 4-yard TD run. Tott added another 67 yards on 4-of-6 passing.

Tight end Jamal Pettigrew had a 2-yard touchdown grab from Orgeron. Wilson has said he wants to get Pettigrew, a transfer from LSU, the ball more this fall.

“He is such a big body you just throw it up there and he can make a play,” Orgeron said. “It’s up to me to get him the ball in a position to make a play.”

“I was pleased with our effort overall,” Wilson said. “There were flashes on both sides of the ball. We are right where we should be.”

Next week McNeese will play its second scrimmage inside Cowboy Stadium. It will be also at noon so the heat will be turned up even more.

The public is invited to that workout.