Well, it was fun while it lasted.

The McNeese State women’s win streak came to a halt at four games Wednesday night as the Cowgirls lost their shooting touch early and then again late.

With top assistant Petrece Carter also out due to contract tracing, it marked the McNeese head coaching debut of Amanda Clemons, a former head coach at LSU-Eunice who is in her second year on the Cowgirls bench.

All that was hard to overcome for the Cowgirls (4-8), who suffered their first defeat in five Southland Conference games.

“It was a tough night,” Clemons said. “We could not get shots to fall.”

The Cowgirls, who entered the game as one of three Southland teams without a conference loss and one game back of Sam Houston State for first place, struggled from the start. After Le’Shenae Stubblefield made the game’s first shot, McNeese missed its next 10 tries from the floor.

“For the most part the shots we got were the ones we liked and had been hitting during the streak,” Clemons said. “They just didn’t fall for us.”

By the time the first quarter was over the Cowgirls were 3-for-19 from the floor including 0-for-6 on 3-point tries. They were also down 14-6.

Shooting got a better in the second quarter, but McNeese trailed 27-17 at the break.

“We felt really good only having given up 27 points in the first half, but we didn’t feel too good about only scoring 17,” Clemons said. “Still, we were in the game.”

Claralee Richard, a junior from Sulphur, led the Cowgirls back in the third quarter. Her 3-point shot with 4:40 left cut the Nicholls lead to 35-31 and gave the home team momentum. But the Colonels (6-8, 5-2) took over from there, outscoring McNeese 26-4 over the next 11 minutes, a span that ended the third quarter and started the fourth. That made the lead 61-35 and ended all hope of any comeback.

“They went on a couple runs there and we didn’t respond,” Clemons said.

Richard had 13 points to lead McNeese with Divine Tanks finishing with 12.

“(McKendree) did everything she was supposed to do and we talked about on the scouting report,” Clemons said. “We gave her way too much space.”

McNeese will try to start a new winning streak Saturday when it travels to Beaumont, Texas, for a game against rival Lamar.

“It is important that we bounce back from this one,” Clemons said. “We cannot let this game impact our next game.”McNeese State junior forward Divine Tanks, center, wrestles Nicholls State’s Bryanna Washington for control of the ball as the Colonels’ Chelsea Cain helps surround Tanks during a Southland Conference women’s basketball game Wednesday night at Burton Coliseum. 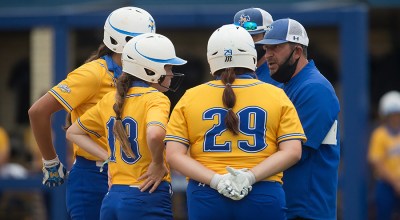