The Calcasieu Parish Sheriff’s Office and the District Attorney’s Office outlined their case against William Felix Vail in an eight-page arrest warrant and affidavit, released Friday.

After what Sheriff Tony Mancuso and District Attorney John DeRosier said was a joint yearlong investigation, Vail, 73, was on Friday charged with second-degree murder, arrested in Canyon Lake, Texas, and brought to Lake Charles. He waived extradition.

Vail is a suspect in the death of his wife, Mary Horton Vail, 50 years ago. When her body was pulled from the Calcasieu River in 1962, her death was ruled a drowning.

Felix did not answer questions asked by reporters as he was transferred from an airplane at Lake Charles Regional Airport to a sheriff’s cruiser Friday night.

Mancuso said Felix has not confessed to the crime.

The affidavit lists suspicious circumstances surrounding her death and says Felix is the last person known to have contact with two other women who are missing.

When Calcasieu authorities traveled to Canyon Lake to interview Felix at his home (described in the affidavit as “a locked compound, the property surrounded by an 8 foot fence topped with barbed wire, and pad locks on all entry gates”), he claimed he was the victim of a cover-up by former District Attorney Frank Salter and other influential people in Calcasieu, the affidavit said.

Felix and Mary’s marriage was “marked by friction,” the affidavit said. She wanted another child and Felix did not want the son they already had.

Felix claimed he and Mary were running trot lines on the Calcasieu River in north Lake Charles on Oct. 28, 1962, but her relatives claimed it was “extremely unusual” that she would have gone fishing because she was frightened of dark water, the affidavit said.

When he pulled his boat into Shell Beach dock at 7:30 p.m., two hours after sunset, he told officers that he and Mary had both fallen in the water, but when he surfaced he could not find her, the affidavit said. Mary’s body was found near the Halliburton docks on Oct. 30, 1962.

Felix was arrested Nov. 4, 1962, although he was released three days later. The case was presented to a grand jury in January 1963, but the grand jury said it could not make a decision, the affidavit said.

Investigators interviewed a former roommate of Felix’s, Isaac Abshire, who was called to testify at the grand jury. Abshire was on his father’s boat, which had contracted with the sheriff’s office to find the body, when Mary was pulled from the river. The affidavit said he was extremely suspicious because her arms were crossed in front of her, there was a scarf inside her mouth and there was a bruise on both the back of her head and her forehead.

The original investigators gave Abshire two photos of the body being pulled from the river, as well as a copy of the original report, which are the only known remaining copies, the affidavit said.

Investigators also interviewed a Mississippi man, Thomas Turnage, who claimed that while riding to work one day, Vail became angry while discussing Mary, calling her a derogatory term, the affidavit said. She “wanted another baby because she thought it might save our marriage —­ but I didn’t want the one I got and I sure didn’t want another one ­— I fixed that damn bitch — she won’t ever have another one,” Turnage said Felix told him. Turnage claimed when he heard that, he knew Felix had murdered Mary.

Dr. Avery Cook, who was not a forensic pathologist, performed the original autopsy. He ruled Mary’s death an accidental drowning, although he could not determine the manner of death, the affidavit said. He said she had contusions on her neck and head and on both legs.

In re-examining the autopsy, current Calcasieu Coroner Terry Welke determined that Mary was “faced-down and dead before she was placed in the water,” the affidavit said. Welke said Mary was murdered, although he could not state what killed her, the affidavit said.

The case was reopened briefly in 1970 when Billy, Felix and Mary’s son, told investigators that he had overheard Felix sobbing and telling girlfriend Sharon Hensley that he had murdered Mary, the affidavit said.

It was reopened recently after a report by Mississippi investigative journalist Jerry Mitchell, the affidavit said.

Hensley’s family reported her missing in 1973. Felix claimed Hensley left Key West, Fla., with an Australian couple named John and Vanessa to sail around the world, the affidavit said.

The mother of Annette Craver Vail, Felix’s second wife, reported her missing to Tulsa, Okla., authorities on Oct. 22, 1984. Annette was 17 when she married 46-year-old Felix. Vail claimed that because Annette was unsatisfied with their marriage she wanted to leave and he dropped her off at a Trailways bus station in St. Louis and never saw her again, the affidavit said.

If Mary died of an accident, “this is extremely unlucky as the disappearance of women associated with him is not uncommon,” the affidavit said.

The 15 Points Of Suspicion

The 15 suspicious points investigators noted in 1962:

1. It was unlikely that Mary would have been sitting on the back rest of the boat seat without a life preserver when she could not swim and had a fear of water.

2. If Felix maneuvered the boat as he said he did, they probably would have fallen in differently than he claimed.

3. When heading in for help, he passed a lighted tug boat without requesting assistance.

4. He passed other lighted locations where he could have requested assistance.

5. His boat likely would have continued to run even if his gas tank turned over.

6. The gas tank was not sitting in its proper place.

7. His trot line, which he had just taken up from the river, was coiled in his tackle box.

9. He made offensive and vulgar statements about his wife, including that he did not love her.

10. Felix had sexual relationships with other females and at least one male.

11. A majority of the witnesses interviewed said Felix was capable of killing Mary.

12. He said it was the first time he had taken Mary on the river to run trot lines.

13. He had bought the life insurance policy even though he was behind on most of his major bills.

15. He did not give a reasonable explanation why he refused to take a polygraph test. 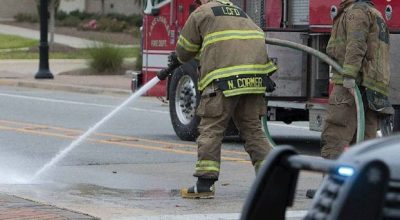